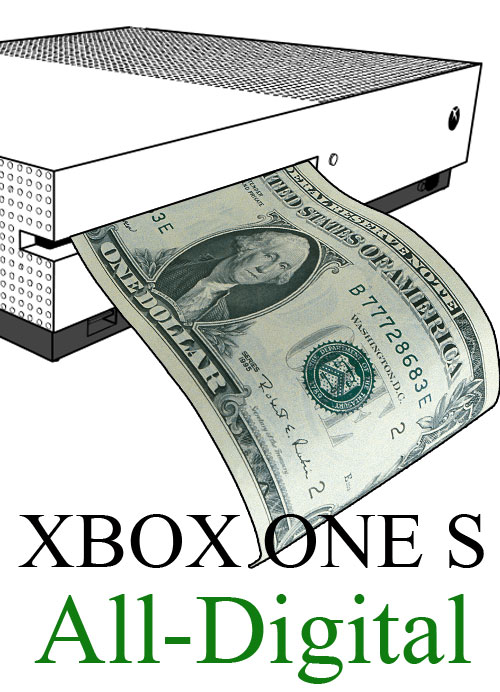 7 Reasons to Buy the Xbox One S All-Digital?

It's as if people don't really want a digital-only console like the Ouya or the PSP Go, or they think the All-Digital Xbox is just a cash-grab, but how could that possibly be? Microsoft has so rarely been wrong about what the gaming community wants.

To help you appreciate this poor, neglected console, we've racked our brains and cobbled together 7 compelling-ish reasons that you should buy an Xbox One S All-Digital console.

The Xbox All-Digital launched with a pricetag of $249, an interesting choice given that the standard 1 TB Xbox One S--essentially the same console but including a disc drive--is readily available for a lower price. Now, some people would want to get more value for a higher price, but Microsoft believes that you'll pay a premium for a stripped-down experience without the complication of clunky old discs.

Buddhism teaches that everything is temporary, so owning things isn't important. That's great if you go all-digital, because you don't really own digital games. When you "buy" a digital game, all you get is a temporary license. You can't trade them or sell them and--here's where it gets really exciting--they can disappear without warning!

3. Marie Kondo says you have too much stuff

Physical games take up space, but digital games only clutter your hard drive. If you run out of storage, you can just delete them; maybe you'll be able to re-download them later if they haven't been delisted.

4. You're sick of borrowing games from your friends (and lending them)

Don't you get tired of your buddies loaning you games? It leaves you with no excuse not to try something new. If you buy the All-Digital Xbox, you'll never have to borrow a game again.

Bonus: Your friends won't be able to borrow your games, either! If they want to try your new favorite game, those chumps can just go buy it themselves!

5. You already have a Blu-ray player

A video game console that also plays CDs, DVDs, and Blu-rays? Stick to your day job, Xbox. If we want to watch movies or listen to music, we'll get a separate player for that.

Microsoft understands that gamers don't like to leave home or interact with people in real life, which is why they've been phasing out couch co-op as quickly as possible. The Xbox All-Digital ensures that you'll never even have to go to a video game store, because you'll be making all of your purchases directly from Microsoft.

7. You hate Christmas (and gift-giving in general)

Remember that magical feeling of Christmas morning, gifts piled under the tree waiting to be opened? Well, get over it. You can't wrap a digital code. You can't return them either, so you'd better hope Grandma got the right one.

There you have it; 7 practically believable reasons to buy the new Xbox One S All-Digital, which definitely isn't a flop.

Can you think of more reasons to buy Microsoft's new discless disaster? Share them on our Facebook page!