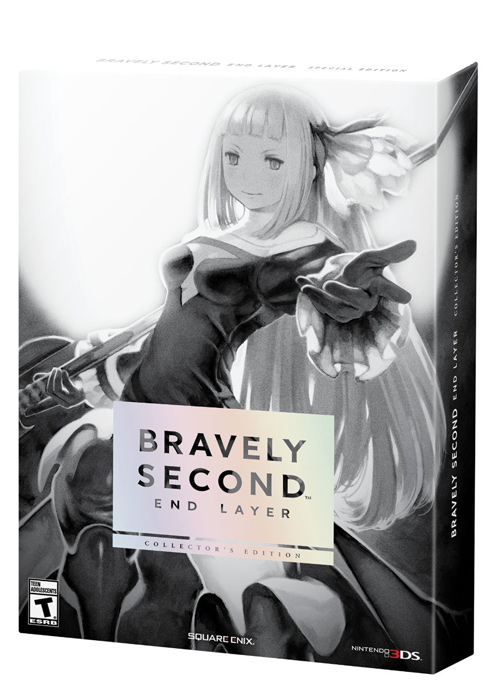 A Second Helping: Counting Down to Bravely Second: End Layer

Bravely Default for the Nintendo 3DS was one of the biggest surprises of 2014, at least for me. I didn't know anything about it when I received it as a gift, so I expected a generic forgettable RPG. How wrong I was! Bravely Default draws you in immediately with an Augmented Reality cut scene--so you're literally immersed in the game--as a fairy begs you, the player, for help. Next, you witness a cataclysm that bereaves your hero, Tiz, of everything he's ever known, and sets things in motion all over the world of Luxendarc. A party forms around Tiz: Agnes the wind vestal, who finds many things “Unacceptable!”; Ringabel, the ladykiller with no memory; Edea, the daughter of the enemy leader; and Airy, a cryst-fairy on a quest to purify the world's guardian crystals. Their adventure is plagued by mysterious characters, hidden motives, and intense moral uncertainties that lead you to question whether you're saving the world or destroying it. Does it sound like a Final Fantasy game yet? That's probably because it was essentially developed as one, a spiritual successor to Final Fantasy: The 4 Heroes of Light.

The most notable difference between Bravely and the Final Fantasy games is the battle mechanics that are its namesake: Brave and Default. Each character in your party has Brave Points (BP) that can be spent to take actions. Defaulting allows you to build up extra BP to unleash more powerful attacks, while using Brave lets your character take several actions in one turn—at the risk of leaving them with negative BP. There is also a feature called Bravely Second that stops time while you take an extra attack with no damage cap. The sequel takes its name from this mechanic.

Come April, the story will continue in Bravely Second: End Layer, set several years after the events of the first game. A lot has changed in the aftermath of Bravely Default, and a new adventure awaits our heroes—some of them, anyway. New characters join the cast, new job asterisks are yours for the taking (including the Patissier, who throws poisoned cakes at enemies, and the Catmancer, who...throws poisoned cats at enemies?), and now you have a moon base, which seems a little strange in a traditional fantasy setting. One of the highlights of Bravely Default is the art; each town and dungeon has a beautiful hand-painted look, while still functioning in 3D, and the summons animations are over-the-top epic. If Bravely Second takes that art style to the moon, I'm certainly not going to object. For those lucky enough to snag the Collector's Edition, a 250-page hardcover art book is one of the perks.

I can safely say that I put over 100 hours into Bravely Default (I'm a little afraid to check the actual number) and although it became repetitive towards the end, that repetition actually served the story, which was excellent. The job system is pretty amazing, allowing you to mix and match skills from different classes to create some pretty broken combinations (like the Arithmetician from Final Fantasy Tactics) that are a lot of fun. This is no accident—some of the optional content is challenging even if you're cheesing with the job combinations. With 12 new classes (a total of 30) and 300 abilities, Bravely Second will bring even more variety to battles.

If you're looking to sink some serious time into a JRPG that's fun, pretty, and challenging, now is the perfect time to jump into the Bravely series. Since Second isn't coming until April (it's so far away!), you have plenty of time to get caught up—just don't let anyone spoil the ending for you.