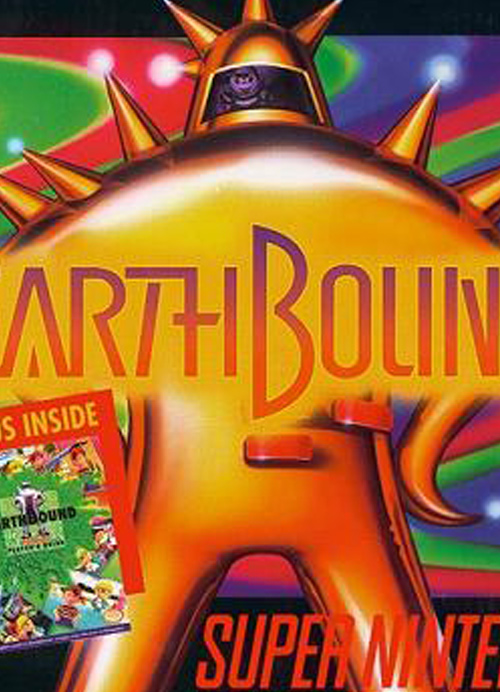 The Goofy Genius of Earthbound

Nintendo has made some weird games over the years. Think about it: their mascot is a mushroom-munching plumber who rides a dinosaur and shoots fire from his hands. That’s not normal. But it’s exactly the kind of thing we expect to come from Japan, where they have underwear vending machines and salty watermelon-flavored Pepsi. Oh, a fox who does barrel rolls in a spaceship while shooting lasers at a giant space monkey head? That’s just Japan being Japan again! It makes you wonder what they think of Americans and our “normal” way of life.

Enter Earthbound. A Super Nintendo RPG starring a normal kid who lives amid the white picket fences and burger joints of small-town America—I mean, “Eagleland.” Ness is the quintessential American kid who loves your favorite food and hits lots of things with his baseball bat. Trees and taxis and hippies and, um, policemen…don’t worry, I can explain. You see, they’ve all been brainwashed (yes, even the trees) by an evil alien named Giygas who wants to destroy the Earth. It’s going to take a lot of yo-yos and bottle rockets to stop him.

What I love about Earthbound is the way it deftly parodies both American culture and traditional JRPGs, but isn’t above making fart jokes. There’s so much quirky humor, from the inane enemies (Slimy Little Pile, Unassuming Local Guy, Scalding Coffee Cup, etc.) to the photographer who’s always telling you to say “Fuzzy Pickles!” Earthbound doesn’t just stick to the RPG formula either—there are innovative mechanics like a health counter that rolls down after a hit, instead of the damage all being dealt at once. And instead of winning money from battles, Ness receives money from his absent father—another subtle dig at American stereotypes. This is also the only game I can think of where you’re inflicted with a status ailment if you don’t call your mother often enough.

Although it developed a cult following, Earthbound didn’t sell very well initially, partly because it was packaged with the player’s guide and thus priced higher than the average game. I’d never even heard of it until Super Smash Bros. included Ness as a secret character. Now, with the growing popularity of the game and RPGs in general, it’s not unusual for an Earthbound cartridge to fetch over $200, a real collector’s item. If you just want to play it, the Wii U eShop sells it digitally for considerably less.

Technically, Earthbound is the second game in the Japanese Mother series, but it’s the only one that received a physical release in the United States. Nintendo recently ported the first game to the Wii U Virtual Console, calling it Earthbound Beginnings, and I fervently hope that they will follow that up with an American release of Mother 3, in which a boy named Lucas befriends dinosaurs and weird trannie fairies. Trust me, it’s great. Series creator Shigesato Itoi has stated that he does not plan to make any additional sequels, but he gave his blessing to fans to carry on the story—and that’s just what they’re doing. If you love Earthbound like I do, this trailer for Mother 4 will give you chills:

One way or another, you owe it to yourself to play Earthbound. If you don’t, you’ll never know how to get rid of a pencil statue.