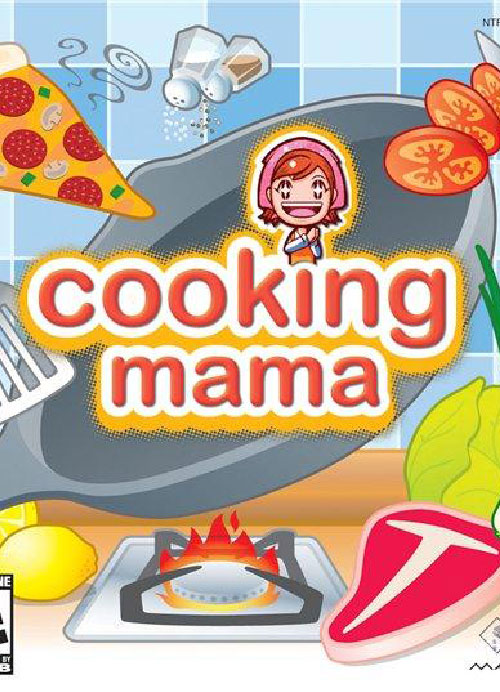 Mama approaches, flames in her eyes as she spots the charred remnants of the croquettes that I have failed to master.  The potatoes were poorly peeled and my coating is uneven.  My mashed potatoes are lumpy.  They aren't even the right shape.  The feeling of disappointment in myself is only surpassed by the look on Mama's face.  My eyes brim with tears of shame.  She comes closer, utensils in hand.

Thankfully, that's only my cooking in real life.  In Cooking Mama, a series of casual cooking games on the Nintendo DS, 3DS, and Wii, I am a culinary master.

The premise is simple.  You are given a recipe which is broken down into a series of steps.  Recipes closely mimic their real-life counterparts.  The variety of recipes is quite good; dishes range from standard hamburgers to international fare such as takoyaki (ball-shaped snacks usually made with octopus).  Tasks are often as simple as slicing a tomato by utilizing the DS touch screen or Wii motion controls, and can last as little as ten seconds.  Successful attempts at these tasks garner the praise of the omnipotent Mama.  Failing to peel enough potatoes or letting your pot boil over are enough to bring her wrath.  Literal flames shoot from her eyes and you feel as though you have truly let Mama down.  You vow to do better and get at least a silver medal for your efforts.

As you progress and complete the initial menu items, you'll unlock more complicated recipes and variations on the ones you have already cooked.  More recent iterations of the series have moved beyond simple cooking.  There are mini-games that involve cleaning your house, as well as head-to-head competition with the computer or other players.  From Cooking Mama 3 on, you are tasked with picking up food at the grocery store as Mama's daughter, Ichigo.  These trips involve racing through the aisles and avoiding running into obstacles.  Good performance in these tasks can also unlock decorations for your kitchen, different colored pots and pans, and even new outfits for Mama.  You will want Mama to look pretty while she judges you, after all.

Mama has many other hobbies aside from cooking, and a multitude of games to reflect that.  There is a Crafting Mama, a Camping Mama, two Gardening Mama titles, and a Babysitting Mama.  Babysitting Mama deserves a particular mention.  In this Wii game, the player must insert a Wii remote into a stuffed baby doll.  Players are tasked with rocking the baby, burping the baby, and not shaking the baby.  Never shake the baby.  If the baby is shaken during the game, Mama will chastise, saying, "No no no, please don't shake the baby."

This is not a series to sit and play for hours.  Ideally it is played in small chunks; play a few recipes or mini-games and then take a break.  It's perfect for small bits of free time on the go, which makes the portable versions of Cooking Mama much more enjoyable than their Wii counterparts.  Personall,y I recommend the third and fourth iterations of Cooking Mama on the Nintendo DS and 3DS.  Is Cooking Mama serious?  No.  Does it feature a story?  No.  Is it still ridiculously enjoyable in short bursts of quirkiness?  Oh yes.  Worried you may not make the grade and destroy the family dinner?

Mama will fix it.

The Legend of Zelda: Breath of the Wild Read More >