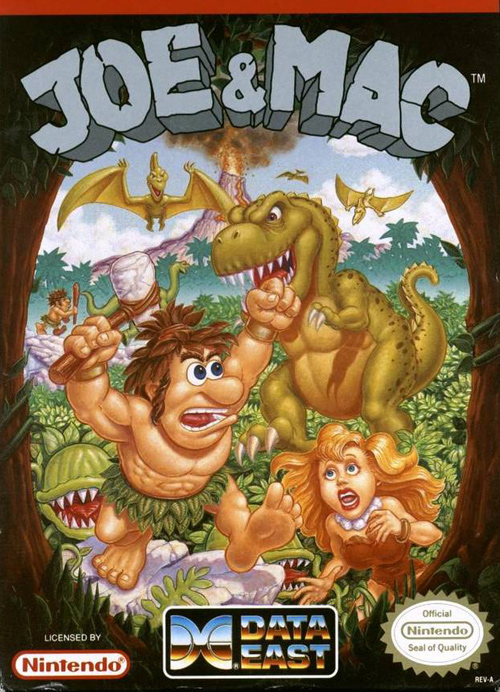 Growing up, I had two goldfish. Joe met an unfortunate end skewered on a piece of plastic seaweed, while his companion Mac lived a ridiculously long time for a dollar goldfish. He couldn't even be flushed in the end, and was buried in my parents' garden. The game they were named after, Joe & Mac, also known as Caveman Ninja and Tatakae Genshijin in Japan, was one I played obsessively on my SNES. I also guarantee that the game is infinitely more fun than a pair of goldfish.

The premise of Joe & Mac is simple; the nerdy Neanderthals kidnapped the cave babes, and it is up to you, the green haired Joe and/or the blue haired Mac to get them back. Levels include forests, jungles, waterfalls, swamps, ice caves, and lava plains. Your trusty caveman club can be upgraded to also throw out bones, stone wheels, boomerangs, and fire. Originally an arcade title, Joe & Mac was ported to many home consoles, including the Genesis, NES, Amiga, SNES and Game Boy, as well as the PC. Though the core gameplay is similar, there are a few differences between the versions that are worth mentioning. All versions apart from the SNES have a health meter similar to Adventure Island, that constantly dwindles as time goes on. The Amiga and PC versions are considered the most faithful to the arcade, though the Genesis version is also close.

The SNES version, which remains my favorite, is different from the others in several respects. There is a standard health bar as opposed to one that depletes over time. There had been criticism in the other versions about the length of the levels, and many of them have been extended for the SNES release. Also, these levels are linked by a map, and bonus stages can be unlocked by finding keys in the normal set of courses. The final boss is also completely different; instead of a giant Neanderthal/dinosaur hybrid, you face off against a flying demon with a pitchfork. While many versions offer the original three endings, the SNES only has one. Several weapons were cut, as well as the ability to charge them.

Joe & Mac boasts a colorful array of enemies. When they are struck, they sport comedic bulging eyes. One boss, the woolly mammoth, actually loses his tusks and trunk as the battle progresses. Also of interest is the simultaneous co-op play. While you can choose to work together, there is also a "super mode" on some consoles, which allows friendly fire. Suddenly your fight against Neanderthals also becomes a competition with your partner. No matter the mode, whoever scores the most hits against the boss wins the coveted kiss from the cave babe you have rescued, while the other sulks in the background.

Data East, publisher of Joe & Mac, released several sequels. Though not marketed as such, Congo's Capers (Tatakae Genshijin 2)is a direct sequel, and the similarity can be seen in the enemy design. Joe & Mac 2: Lost in the Tropics introduced RPG elements, and allowed you to court one of the cave women in your village; you could buy them gifts and upgrade your home to impress them, as well as raise a cave baby. The final game, Joe & Mac Returns, is a single screen platformer for the arcade, similar to the Tumble Pop and Bubble Bobble games.

Largely forgotten in the retro market, Joe & Mac and its sequels are worth picking up. They're great platformers, full of fun and great graphics. People looking for a good co-op experience should especially take a look at these games. There are so few examples of simultaneous co-op, and these are a fantastic place to start. While Joe & Mac 2 has become somewhat rare, the first game is still fairly common, and a worthy addition to any collection.