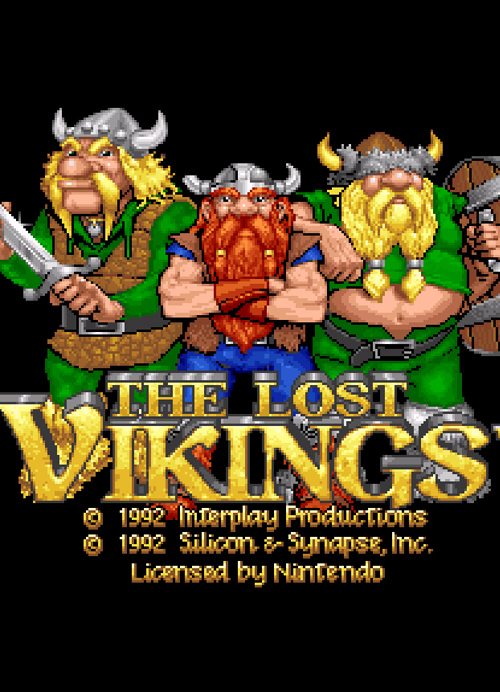 Long before Blizzard was making World of Warcraft, Diablo, or even Warcraft, it was once a company called Silicon & Synapse. The studio first focused on ports for other studios, before breaking out with their own games, Rock n' Roll Racing, and The Lost Vikings, a puzzle-platformer. The Lost Vikings captivated me as a child. Three Vikings are kidnapped from their homes after a long day of hunting, and have to find their way back home. The only problem is they've been kidnapped by the evil alien Tomator, emperor of the Croutonians. They're light-years from home, and faced with technology far beyond their bows and arrows. While making their escape from the spaceship they end up thrown through time, landing back in the stone age, and eventually making their way through different time periods.

To solve each stage's puzzles, the Vikings must work together, utilizing their unique abilities. Erik the Swift is the only Viking that can jump. He can also run faster than the others, and use a head bashing ability. Olaf the Stout can block enemies with his shield, provide a platform for the other Vikings, and float with his shield like a hang glider. Baleog the Fierce is the muscle of the group, sporting a sword and a bow and arrow to take down enemies near and far. What really stands out is the humor and dialogue between the characters. They banter between each other at the start and end of each level. If you have managed to repeat a level more than a few times they'll comment on having a strange feeling of déjà vu. There is no limit to the number of lives you can have, and each time you manage to kill a Viking, you'll watch a Viking funeral before beginning a new, with lightning bringing the fallen back to life to attempt the level again.

Though The Lost Vikings was an early entry to Blizzard's portfolio, it has remained special to them, and has been featured in a number of their properties. In World of Warcraft the trio can be found in Udalman, and are featured more prominently in the Cataclysm and Warlords of Draenor expansions. In Blackthorne they are found in a secret snow level. Heroes of the Storm recently added all three as a single hero for play with several outfits, including one with Baleog in a bunny suit. The Easter Eggs go both ways; The Lost Vikings 2 showed Tomator playing Rock n' Roll racing on a monitor in the background, while Erik the Red is accidentally sent to The Swamp of Sorrows, a World of Warcraft zone.

There are several console versions of the The Lost Vikings. The Sega Genesis version features five extra levels that the others do not have, but apart from this they are all similar, with the exception of the GBAs lack of password save. Along with Blackthorne and Rock n' Roll Racing, Blizzard has offered the game free on Blizzard.net by utilizing DOSBox. Blizzard also gave the game a sequel, The Lost Vikings 2, available for SNES, and renamed Lost Vikings 2: Norse by Northwest for the Sega Saturn, PlayStation, and PC. The SNES version was similar to the first in art style, while the others were completely revamped for 32-bit systems.

This quirky puzzle-platformer is also a great co-op game, and is accessible to non-gamers. Each player takes control of one of the three Vikings, and can switch between them as needed. Solving the puzzles with a friend or family member and enjoying the humor together is a fantastic way to pass the time. There are password saves for each level, so you can always return to your favorites. If you are hunting for these titles, the SNES versions are the most sought after, and will be more expensive. The Genesis is an extremely affordable option for the first game, and the PlayStation offers the most accessible price point for the second. Both games are worth a look, especially for those with an interest in Blizzard's stellar library.