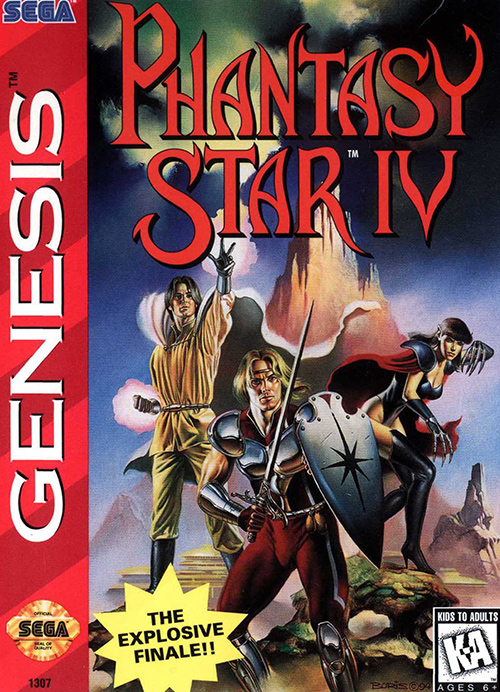 Phantasy Star IV was released on the Sega Genesis in North America in 1995. The game plays as a typical turn based RPG with overhead exploration. The story follows Chaz, a young hunter, as he travels the planet of Motovia fighting against biomonsters. As the story unfolds you find that the black magician named Zio is at the root of the problems. He is not only after the destruction of Motovia but also the destruction of the entire Algol system. Defeating Zio is your initial goal however you soon realize there is a stronger evil waiting in the shadows.

This game was my first introduction to RPGs and I loved it. The story seemed a little cliche at first but as I continued to play there were twists and turns that kept me very entertained. One such surprise was gaining up to 3 different vehicles to not only travel across the map with but also to use in combat. When I thought I had recruited all the characters I could and was going to start level grinding, the game gave me a new twist and sent me to space leading to not only more places to explore but also even more characters to join me. Sadly though not every character is able to make this journey to the stars, Zio sees to that.

When all is said and done you have a total of 10 playable characters throughout the game each with different skills and abilities. Many of these abilities are physical or magical attacks. Others however are heals or character buffs which are also essential for successfully defeating some of the stronger bosses. My favorite of these abilities were the ones you could combine together for additional effects or an overall stronger attack. If 2 or more of your party members used particular attacks in sequence you could pull off a combined attack which was usually not only fun but quite effective.

A compelling story that keeps you wanting to continue without putting down the controller. The battle system was straightforward and simple to understand but was also engaging and allowed for different play styles. Exploration was fun and also crucial as several of the top weapons and abilities were found only through exploration. In my opinion this was one of the best RPGs I've ever played.