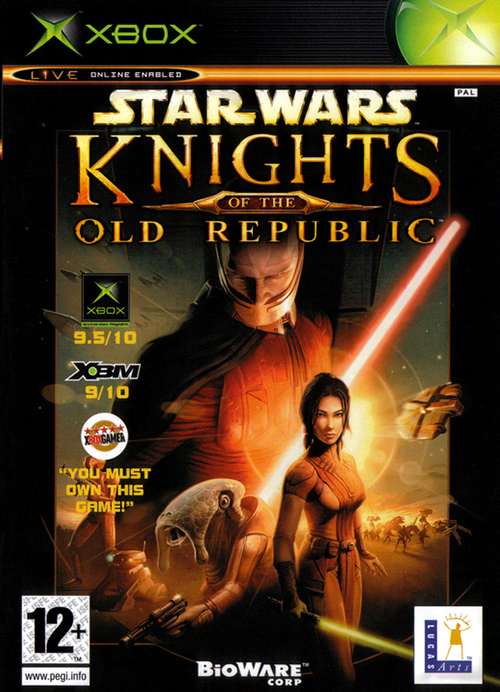 Star Wars Knights of the Old Republic was released in North America in 2003 on the Xbox. This was the first Star Wars RPG and used the D20 system from Wizards of the Coast. You begin the game on a republic ship called the Endar Spire which is currently being attacked by Darth Malak. After successfully escaping, you travel to different planets recruiting allies and learning more about your past all the while trying to stop Malak. During the game you're frequently given choices on your actions. Each of these choices determines whether you follow the light side or the dark side of the force. Do you force persuade someone to let you pass or just force choke them to death?

Star Wars KOTOR was uniquely exciting for me. Using the D20 system allowed for a lot of customization for not only your character but also the companions you recruit as well. Being quite familiar with D20 systems from playing Dungeons & Dragons I was able to plan out my character with certain abilities and skills in mind. I focused on a maximum damage group for my dark side character and utilized force lightning as my primary and favorite attack. You have a wide range of skills and abilities available to learn. Not only do you choose combat skills and abilities but also ones to use out of combat, some of which would allow for new dialog choices. Combat was turn based, however you played in a 3D environment and could move around freely while taking actions. Combat could also be paused if the player wanted to queue up actions for each combatant for a more strategic play. Learning when to pause combat and use defensive or healing abilities was a must, which I did occasionally to use a med pack or 2.

If you're looking for a Star Wars game that isn't just a hack and slash then this might be a game for you. KOTOR has extensive character customization, an entertaining story, and of course lightsabers!