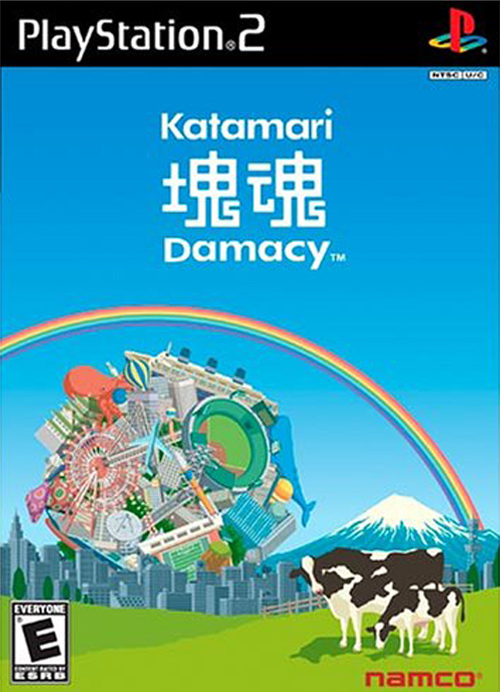 "Why do the watering cans have twins?"

"Did we just roll over a bunch of school children?"

"Why did the King just puke a rainbow?"

This introduction of Katamari Damacy to a mutual acquaintance in college led to one of the longest friendships I have had.  One cannot underestimate the bonding that occurs when extremely odd and quirky games are involved.  Released in 2004 on the Playstation 2 as the result of a school project , it has spawned a number of sequels, and a large cult following.  What is it about this strange title that has people clamoring for more?

Katamari Damacy, which can translate to "Spirit of the Clump," or "Clump Soul," puts you in control of the diminutive Prince of All Cosmos.  Your father, the King of All Cosmos, has gone on a bender and destroyed the moon and all the stars in the sky.  Rather than accepting responsibility for his actions and cleaning up his own messes, you have been tasked with making the new stars.  To assist you with this task, you have been given a Katamari, a ball capable of picking up any object smaller than itself.  The core gameplay is simple; using the joysticks, move the Katamari around, roll over objects, and make a ball of the specified size within a time limit.

Though there is a small amount of plot involving a Japanese family, the true joy in Katamari Damacy is what you'll run over.  You begin small, with items smaller than your 5cm tall self.   The first level takes place in a house, and you are tasked with picking up thumb tacks and cookies.  You are so tiny that even the mice chase after you.  Eventually the tables turn and you can chase them down and roll them into your Katamari before rolling over the homeowner's dinner.  After escaping the house, a small town is at your mercy.  Though there are a fair number of normal folks, some citizens include mariachi bands riding on elephants, men in mascot suits on swings, and "dangling boy."

The stages to recreate the constellation give the Prince a specific task or object to pick up.  To remake Gemini, pairs of objects are rolled over to form sets of twins.  Inanimate objects, such as the previously mentioned watering cans, have older and younger versions to pair together.  In the Taurus stage the Prince must roll up a cow.  One singular cow.  In order to get the praise of the King of All Cosmos, it  must be better than the small cows roaming around the starting area.  Objects in cow print count as well.  I will never forgive myself for running over a cow print cone right before picking up a truly spectacular Holy Cow.  Though the King of All Cosmos was not happy, he still released it "into the sky with a deafening moo."

Though simple, the blocky art style contributes to the charm of the game.   The colors are bright and the mood is cheerful.  The excellent soundtrack is likely one of the happiest video game soundtracks that I can recall.  Its theme, "Katamari on the Rocks," is sure to brighten even the worst of days.

Beneath this bright and cheery façade is a game that is, in actuality, quite disturbing.  In your noble quest to create new stars many living creatures fall victim to the wrath of the Katamari.  Homes, cities, even nations are destroyed in the wake of the tiny Prince.  The King of All Cosmos is extremely harsh on the Prince, often insulting him despite completing his tasks.  If the Prince fails to live up to his expectations, the field is filled with lasers shooting at the Prince from his father's eyeballs.  Despite this, it's hard not to like the King.  He is completely unaware of how horrid he is and completely self-important, as is shown in his proclamations using the royal "we."  For a game with little plot and nearly no dialogue, his monologues give Katamari its own twisted humor.

Even with this slight sadistic streak, Katamari Damacy is a game I always recommend to anyone with a sense of humor.  The controls are easy to understand, the game is silly, and it will bring a smile to your face.

And it's disturbingly satisfying running over people and hearing them scream.