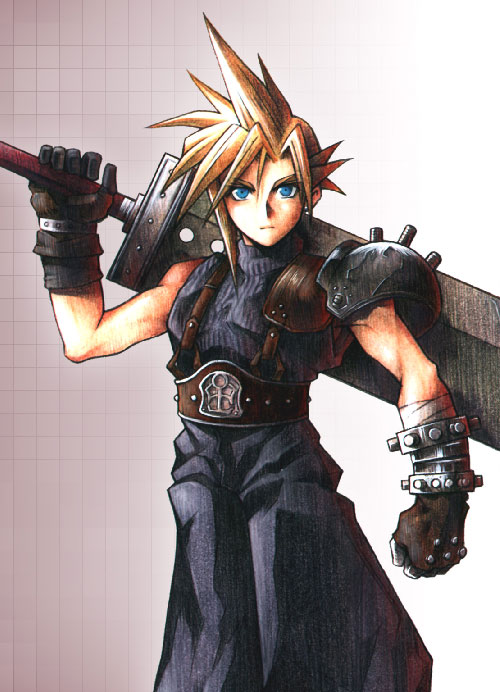 The Legacy of Final Fantasy VII

I remember watching commercials for Final Fantasy VII when I was 11 and being blown away by the graphics. I’d only played the original Final Fantasy for NES, so the difference was outrageous. Cinematic cut scenes, 3D characters, huge swords—it was like watching a movie trailer. There was even a deep, manly voiceover to give it that extra level of macho appeal. Never before had I seen a game presented with such cinematic flair, though today that kind of pageantry is more commonplace in video games. It wasn’t until many years later that I had the opportunity to play Final Fantasy VII, but still I was impressed by just how much was involved in the game, especially considering that it was released in 1997. Do you realize that was before Nintendo had made the Game Boy Color? It even predates GoldenEye on the Nintendo 64.

Cloud Strife, everyone’s favorite spiky-haired, Buster Sword-wielding hero, has grown so much bigger than the walls of Midgar.  He has made multiple appearances in other video game sagas, most notably in Kingdom Hearts, and has even crossed platforms to storm into battle in Super Smash Bros. for the Wii U and Nintendo 3DS. Something about this character made a profound cultural impact.  So what is it about Cloud that makes us love him so much?  I mean, I don’t hear people pushing to get Cecil or Tidus into Smash Bros. Maybe it’s the mysterious appeal of Cloud’s broken and distorted background.  Or maybe the fact that he’s so flawed makes him more relatable to the average person.  Here’s a guy who pushes people away and has built his life and career on a lie he created to make himself look better.  Doesn’t sound like much of a hero, does he?  Yet, we find ourselves cheering for him the same way we enjoy seeing the redemption of anyone stuck in a dark place in life.

Now, the internet is abuzz with the announcement that Square Enix is developing a Final Fantasy VII remake. It’s something the fan community has been begging for for years, and it’s finally going to happen. Here we are, almost 20 years after its original release, and Final Fantasy VII seems as popular as ever. For the FFVII virgins who are waiting to play the game when the remake comes out, I still recommend playing the original if you have the chance.  Playing the PS1 version will give you more of an appreciation for the game and will help you understand why everyone went crazy just because they saw the back of Cloud’s head in the teaser for the remake.  After investing 70+ hours journeying with Mr. Strife and his blocky features, a glimpse of Cloud with hair that actually breaks up into strands is enough to make you drool.

The original Final Fantasy VII isn’t perfect, by any means.  Due to some confusion on how the programmers wanted the characters to look, there are three different versions of their appearances.  I liked to pretend that they always looked the way they do in the cut scenes, but most of the time they are horribly proportioned polygonal figures with amazing thighs and forearms but pencil-thin biceps. Then there are the impressively bad typos and misuses of words that resulted from poor translations of Japanese (my favorite is “This guy are sick!”).  But beneath all these superficial flaws there is an amazing story about characters with depth that will carry you through the game. I’m not surprised that fans have been demanding a remake; imagine what Final Fantasy VII will be like with today’s graphics and standards.

Personally, I am glad to see that Final Fantasy VII has endured and continues to be regarded with reverence in the video game world.  An updated version of the game will introduce a new generation to the conflict with Shinra and their scheme to deplete the energy from the world through their Mako reactors.  And the appearance of Cloud in other series and platforms may win over new fans that possibly have never played a Final Fantasy game before.  So many of my favorite games have risen and fallen and have been shelved behind newer and shinier installments, but Final Fantasy VII continues to prove itself relevant to any era, whether it’s presented in the block-tastic graphics from 20 years ago or today’s near-realism. However you play it, FFVII is an RPG for the ages.

Shadow of the Colossus Read More >