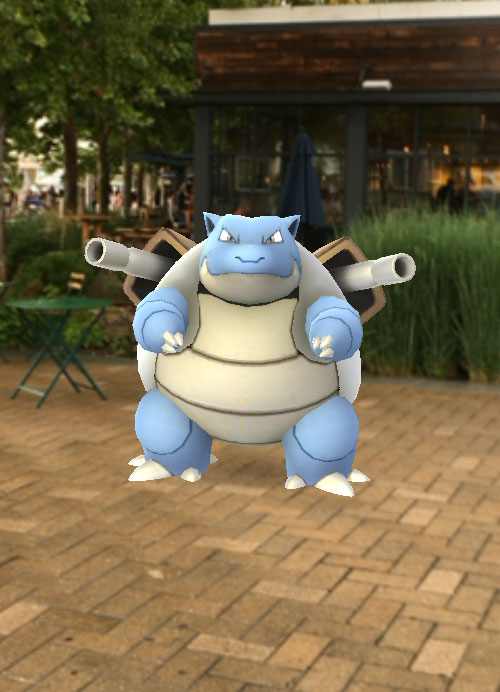 Last night, my wife and I ate dinner at a new restaurant in town, and to our surprise there was a Pidgey on the table! He was eyeing up my chicken saltimbocca, probably weighing the pros and cons of borderline cannibalism, so I did what any trainer would do and I captured him in a Pokeball.

The evening was cool and it wasn't very late, so we decided to take a walk around town. Apparently we weren't the only ones; the sidewalks were bustling with foot traffic and everyone in town seemed to be outdoors. Nearby, a statue suddenly flared blue--a PokeStop! I picked up some extra PokeBalls and we continued on towards the glowing tower ahead: one of the churches on Main Street had become a full-fledged Pokemon Gym. We were almost there when a Zubat flew into my wife's hair and gave her quite a start!

"Are you catching Pokemon?" someone called out. "So are we!" Looking around, we realized that all these people weren't just out for an evening stroll--they were Pokemon trainers on the prowl! Everyone we passed had their eyes locked on their phones, fingers ready to pitch PokeBalls at the slightest movement.

Pokemon GO is encouraging people to GO outside, to GO visit landmarks, to GO meet other trainers, and it's rewarding them for being active and social. At first I thought it would be the downfall of society (because seriously, who can focus on work when there's a Zapdos RIGHT OUTSIDE??), but now I think it might be the foundation of a new one. I love the sense of community it creates--we're all doing this together, so I don't feel like a moron when I catch a Venonat in line at the bank. In fact, Pokemon GO has had the opposite effect--when I encountered a Blastoise in the wild earlier today, people cheered me on while I tried to catch it, just like in the commercials! Ten minutes and 50 Pokeballs later, Blastoise was mine, and the crowd went wild. It's no wonder that people are reporting that Pokemon GO has been helping their depression and mental health.

We live in an amazing world right now. A world of Pokemon. Thank you, Pokemon GO.