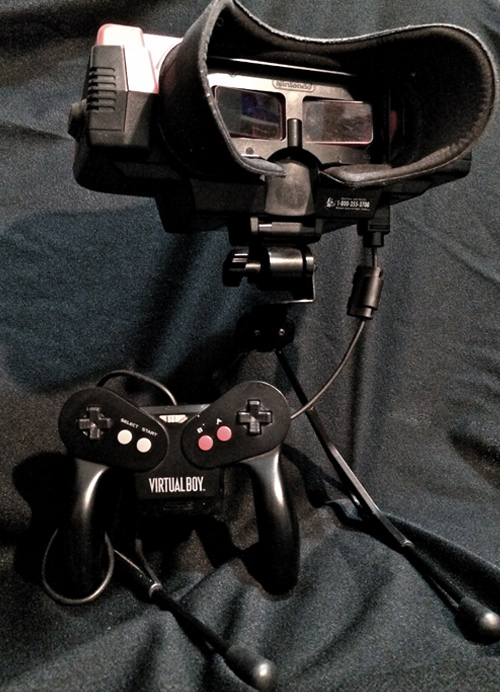 Imagine playing video games while being totally immersed in a virtual reality experience.  Sounds enticing, right?  This is what Nintendo promised back in 1995 with the Virtual Boy, but the console didn't quite live up to the hype.  It did bring on a new way of experiencing video games, but fans were let down when they discovered the monochrome display and the stationary nature of the console, which did not interact with bodily movements the way people envisioned a virtual reality console would.  However, I believe that even though Nintendo dropped the ball in properly representing the capabilities of their shining new “portable” system, they still produced a thoroughly enjoyable way to play video games.

Sure, the system itself was not really portable, used an excess of batteries, caused dizziness and nausea for some users, and only produced a handful of purchasable games during its brief lifespan, but it created an experience unlike any other in gaming.  With it, you could enter into a virtual world of three-dimensional red shapes, while the foam blinders kept the real world at bay, making it easy to get lost in the experience.  Normal gaming consoles still permit the risk of distractions by surrounding visuals, but the Virtual Boy allows you to be totally immersed in the game.  I have enjoyed hours of playing time with this unique bipedal device, and the only way I could tell any significant amounts of time had passed was by the cleverly designed "Automatic Pause," a feature that was designed to remind the player to rest their eyes every 15-30 minutes.  I’ve started up many games thinking I would only play for a few minutes, and the Automatic Pause would serve as a reminder that I had once again failed to keep my playing time short.

The graphics produced by the Virtual Boy may not be impressive by today’s standards, but it was released in an era when exploring three-dimensions in video games was just entering the mainstream with systems like the Nintendo 64 and the Sony PlayStation.  So the fact that this produced a platform for classic games like Wario Land and Tetris to explore some extra depth in a console that didn’t require a television set is quite impressive.  I can’t think of a single side-scroller that hops back and forth on parallel platforms in the same way as Virtual Boy’s Wario Land, arguably the best game created for the system and maybe even the best contribution to the Wario Land series.  Plus it gave Mario yet another occupation by making him a tennis player in Mario’s Tennis.  Had Nintendo tried to make a Mario tennis game prior to this, it probably would have been nothing more than a glorified Pong with licensed cameos.

Maybe if Nintendo had marketed the product a bit differently at the time instead of promising a “virtual reality” experience, it might have found more success.  Who’s to say?  But for today’s gamer, I believe the Virtual Boy to be an important addition to any collection, and not just for the nostalgia.  I regularly go back to my system to replay games because of its unique playing style and engaging games.

Shadow of the Colossus Read More >